There he was again: Chairman Mao standing tall and majestic in the middle of Zhongshan Square, a hand raised, as if hailing for a taxi. Last week, as my own taxi drew closer to Liaoning Hotel, a colonial style hotel right by the square, in central Shenyang, the familiar view came into sight. It startled me as the massive statue felt at odds with the high rises surrounding the square.

As I was growing up during the ‘Cultural Revolution’ (1966-76), Mao’s statue, in different sizes and made from different materials, could be found everywhere in China, gracing offices, factories, homes and every city’s main square. He was worshipped like a god then. A few years after the death of the ‘great leader’ in 1976, the pragmatic leader Deng Xiaoping took over power and led the Party in the full reassessment of Mao’s legacy. A desacrilization followed. Mao’s portraits slowly came down across the country, and most of the giant statues, the essential decoration of urban scenery, were quietly removed.

Only a handful were allowed to remain, for example, the statue inside China Geology University in Beijing, the one in Chengdu and another in Kashgar.

After dinner, a Spanish friend and I went to Zhangshan Square to take a closer look. A few elderly were doing exercises and a couple of dozens of people were crowding around, practicing English with each other – the square serves as the city’s ‘English Corner’. From the inscription, I learnt that the statue was erected in 1969, during the height of the “Cultural Revolution” as well as his personality cult. The base is lined with smaller statues of workers, peasants and soldiers who supported Mao’s revolution. Mao’s image is the classic one: the great helmsmen in his old age, wearing a heavy long coat, his right holding high. And judging by the look of it, I guess this memorial also followed a so-called ‘magic formula’: its statue 7.1 meters high, commemorating the birth of the Communist Party of China on July 1 and its base 5.16 meters, a reference to the "516 Announcement" drafted by Mao Zedong which set out the "guidelines for cultural revolution". If you add the two, the sum comes up to 12.26: Dec 26 is the date of Mao Zedong’s birthday.

Since I was with a foreigner, several people came up to talk to us, quite a few of them students. A young man who called himself Alexander told me proudly that he is planning to go to Canada to study next year. When I asked him about what he thought of Mao, he said: “Chairman Mao was great! Our great leader and national hero.”

I thought to myself: well, if the great leader were still alive, you wouldn’t dare to study English or even dream to go abroad. I am not surprised by his answer. In various surveys among the Chinese youth about the most admired men in the world, Mao repeatedly comes on the top of the list. For many Chinese, the young and the old, Mao was the man who united China, who made China to stand up in the world and who gave its people an identity. Besides, the young people have not had a chance to study Mao truthfully. The official verdict on Mao is 70% correct and 30% wrong. The authorities don’t want its citizens know too much about his mistakes or the causes of such mistakes – after all, they reflected the faults of the Party and the system. Years ago, I was invited by a Chinese publishing company to write a book on western image of Mao, to be published in 1993, to commemorate 100th anniversary of his birth. I read all the books I could find in English on the man and interviewed many westerns from all walks of life. But the book failed to pass the censorship – his image was far too negative, I was told.

Chairman Mao fares much better in his home turf. At Zhangshan Square, if I bothered to ask the old men doing taichi, one or two would likely remember him fondly. For a lot of old generation of Chinese, especially those who are not doing so well in the market economy, Mao has come to represent a past sometimes glorified for its simplicity, stability and equality.

The next day, I left Shenyang by bus to head east towards a small county town in Jilin province to visit a friend there. In the outskirts of the town, while still on the bus, I spotted a porcelain factory. In the yard, among vases, jars and piles of plates, stood a few life-sized Mao statues, in the same pose as the one in the square. The locals told me that people buy it to put in their restaurants or in their homes.

I remember reading an article in China Daily, quoting a survey conducted in 2008 by Horizon Research Consultancy Group which suggested that 11.5 percent of Chinese in 40 Chinese cities and towns worship Mao statues at home. People pray that Mao would bring them good luck in their business, marriages and health. I am not sure I can believe the figure – it sounds too high, and disturbingly so. But I have no doubt that a deitification of some sort has been going on. There have always been rumors how vehicles avoided all accidents and robbery through the mere presence of Mao’s picture. Where do myth and truth meet?

Actually, the desacrilization of Mao has never converted every corner of China. In late 90s, I interviewed a Party Secretary in a remote village in Northern Shanxi where he used the funds for poverty alleviation to build a temple to worship Mao, which he described as a ‘real Dragon Son of Heaven’. The emperor worship is still deeply-rooted in China.

The ghost of Mao. His portrait is still hung high on top of Tiananmen Gate and the queues to visit his mausoleum still snake long. When will China ever walk out of the long shadow Chairman Mao has cast and entered a real modern world? 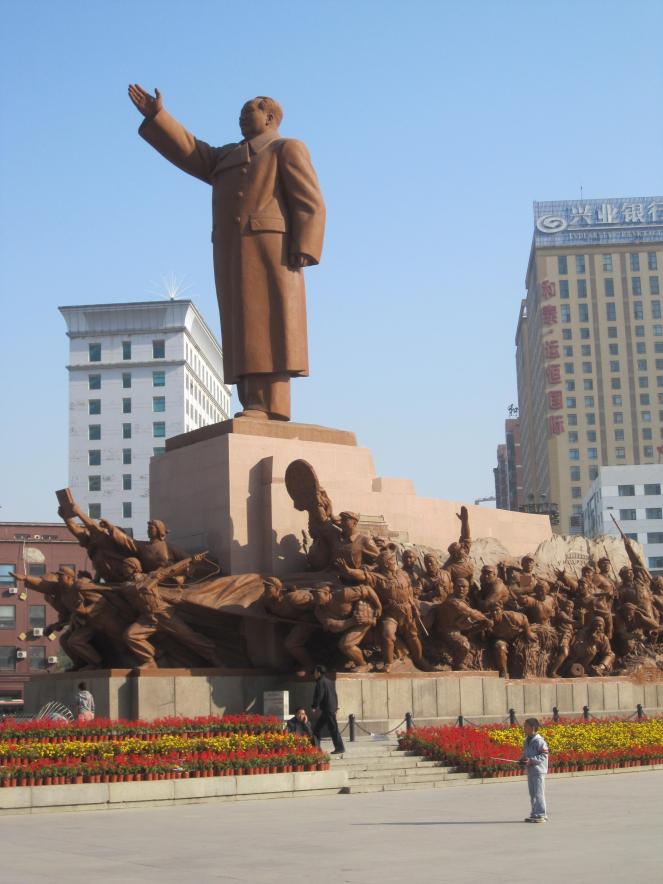 7 thoughts on “Chairman Mao Statues and His Status in China”