In Tbilisi, the capital of Georgia, there was an underground printing workshop. In those inter-connected underground tunnels, Stalin and his revolutionary colleagues printed revolutionary magazines and pamphlets, calling to overthrown the Tsar.
I heard about this place from my friend Wei. He, in turned, had read about it in a Chinese textbook. When he and his lovely wife Karin visited Tbilisi some dozen of years ago, they visited the workshop, now a house museum. He was pleased to find it matching what he had read as a child in an article written by renowned Chinese wrier Mao Dun.
While I was in Tbilisi recently, I made a point of visiting it. When I turned up, the old caretaker, pushing 80, was watching some film on his tiny black and white TV. The museum is now run by the Georgian Communist Party. Without any financial help from the state, the house museum has been crumbling. When the caretaker is not in the mood, he sometimes doesn’t bother to open it; but if any visitor shows any interest, he will bombard you with information he knows, so I had heard.
Upon learning I am a Chinese, the old man’s eyes lit up – nearly half of the visitors come from China.
He led me to the printing machine, a German beauty. It was smuggled into Georgia in pieces through a network of underground revolutionaries. Then he took me to see the 15 meter-deep dry well and the inter-connected tunnels – from where the revolutionaries operated. Meanwhile, two women looked out from a little house and would send signals when police approached. The caretaker is obviously a dye-hard Communist who looks back at the revolutionary through rose-tinted lens and I had his lavish attention – well, I was the only visitor on that morning.
For three years from 1904 to 1906, Stalin and his colleagues churned out thousands of pamphlets. After the police discovered it, they filled out the well and the tunnels and the operation stopped.
After Stalin came to power, the underground printing press was restored to its original state.
Before I left, the caretaker insisted that I wrote something in the visitor’s book. Sure enough, plenty of Chinese characters crawled all over it. As I sat there, thinking what to say, he showed me a Chinese textbook which includes the Mao Dun article that had inspired my friend Wei. Finally, I scribbled: remember history, and reflect history. Thank you Wei and Karin for the tip. I greatly enjoyed the visit. 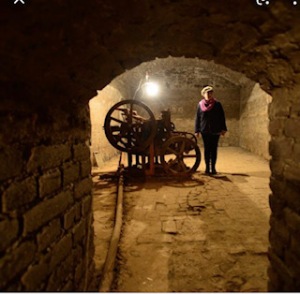